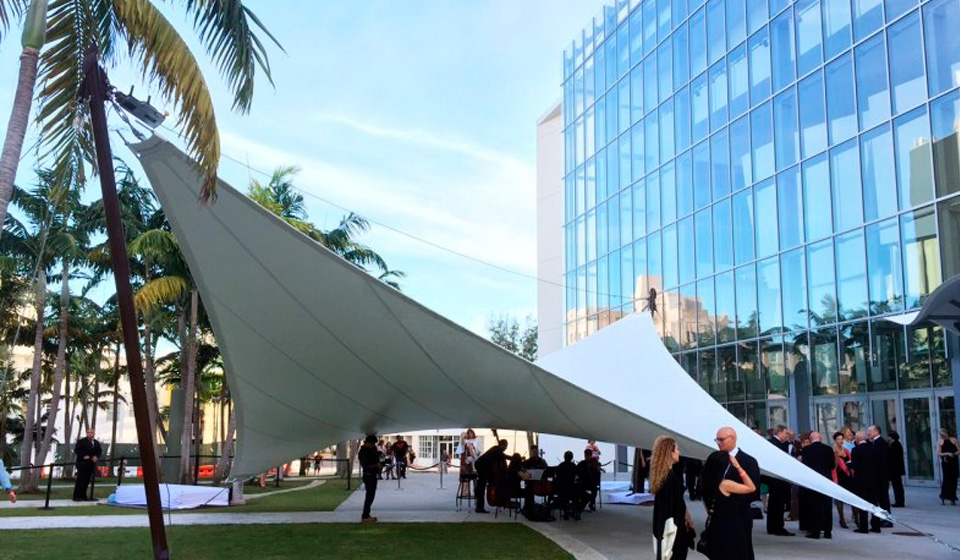 The 2015 Pritzker Architecture Prize ceremony honoring architect Frei Otto was held May 16th beneath a Birdair open-air, hyperbola shaped, 1,000-square-foot PVC membrane structure, designed as a replica of a stunning, 1955 Frei Otto canopy design. Birdair was honored to design and build the canopy for the ceremony, which took place in Miami Beach at the New World Center, a venue designed by 1989 Pritzker Prize Laureate Frank Gehry.

The Pritzker Architecture Prize honors a living architect or architects “whose built work demonstrates a combination of those qualities of talent, vision, and commitment, which has produced consistent and significant contributions to humanity and the built environment through the art of architecture.” The laureates receive a $100,000 grant and a bronze medallion.

The international prize was established by the Pritzker family of Chicago through their Hyatt Foundation in 1979. It is granted annually and is often referred to as “architecture’s Nobel” and “the profession’s highest honor.”

Frei Otto was an architect, visionary, utopian, ecologist, pioneer of lightweight materials, protector of natural resources and a generous collaborator with architects, engineers, and biologists. He passed away at the age of 89, in his native Germany on March 9, 2015.

Otto pioneered the use of modern, lightweight, tent-like structures. In 1958, he founded the first of several institutions that were dedicated to lightweight structures — the Institute for Development of Lightweight Construction. Otto wrote extensively throughout his career. His books include Biology and Building and Ancient Architects.